West Australian four piece Blue Shaddy are a family band that seem to fit more into one song than most do in a two hour set.

West Australian four piece Blue Shaddy are a family band that seem to fit more into one song than most do in a two hour set. Hot and sweaty and dripping with juice.

Jim McClelland, guitarist singer and main songwriter blends elements of, blues, country, and rock in his writing creating a whirlpool of foot stomping infectious energy. Taking you from a Smokey, whiskey soaked blues lounge, to funky town, then winding up drinking moonshine in the all in haystack hoe down. After having to cancel yet another States Tour this month, The Shaddys are as ready as can be to hit the stage at Six Degrees

To quote ‘The Hollies’

‘The road is long, with many a winding turn’, he aint heavy he’s my brother. Then there’s a wife and a best mate together in this West Australian Blue’s / Country / Rock band, ‘Blue Shaddy’.

But with life’s winding trail of twists and turns, Kids and covid 19, Blue Shaddy are still commitment to putting food on the table and paying the bills, no matter what it takes. Only just managing to keep the wheels firmly on that road during tough covid times, the stars or powers that be, have brought ‘Blue Shaddy’ together once again fresh and ready to take on 2021. With a number of quality shows locked in for early 2021 the Shaddys are ready to get on with it. Starting with headlining the Blues Fest Mundaring Weir Hotel 13th March, Ravenswood blues Festival 19th February, Nukara music Festival 16th -18th April, and Blues On Broadbeach QLD 18th – 23rd May.

It’s been some 27 years since ‘Neil (Jim) McClelland’ (singer/ songwriter/guitarist), and brother Graham (Belly) McClelland ( harmonica) with good friend ‘Sandy’ on bass guitar and now also Jim’s wife, all sat around a kitchen table in a small farm house in the wheatbelt town of Kellerberrin. There they shared a drink or ten, jammed some ‘Sonny Terry’ and ‘Brownie McGhee’ tunes and hatched a plan that was to become ‘Blue Shaddy’. It didn’t take them long to realise that a move to the city was on the cards, where they soon met Tasmanian drummer, ‘Dean Wuksta’ and ‘Blue Shaddy’ was complete.

With a chemistry within the band that can only be put down to kin, ‘Blue Shaddy’ have only ever had the concern of replacing drummer’s as their own personal lives took each one of them in turn on their own journey. Having had the pleasure of playing with some of the best in the business, Chris Oldman, Conrad Parker, Rick Eastman, Angus Diggs, Arunachala Satgunasingam, Kanchana Karunaratna, and Callum Kramer, ‘Blue Shaddy’ are blessed that their old mate, and exceptional drummer found his way back to the family. ‘Blue Shaddy’ are a high energy ‘Blue’s, Counrty, Rock band that pull the audience right on board with them during their live shows. While Dean and Sandy hold a fat back groove one minute, then a loaded rolling freight train fang the next, alowing Jim and Belly the freedom to go head to head,with raw exuberance. Trading guitar and harmonica licks in a flurry of musical emotion. While Jim shows his ‘balls to the wall’ style of guitar playing, belly moves like a cat on a hot bed of coals. Never a dull moment is usually the moto! If the audience isn’t dancing we’re doing something wrong. file:///C:/Users/sandmac/Documents/Blue%20Shaddy%202017.pdf

‘Blue Shaddy’ have independently released four studio albums to date, and are currently working on some new material to be released in the not too distant future

‘Blue Shaddy’s first album being showcased in the U.S through ‘Tin Records’, and ‘Howling Dog’ made it onto

a smile on their face and ready for good sit down until next time. 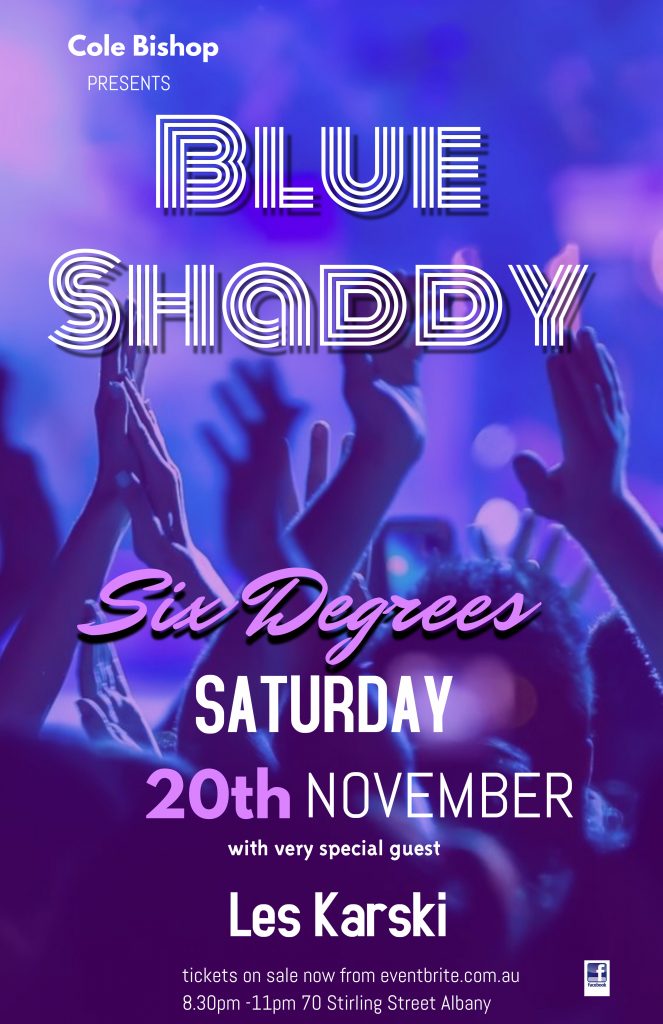